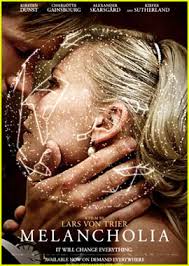 After Von Trier’s last outing,  “Antichrist” I found myself interested in his upcoming movie “Melancholia” starring a grown up Kirsten Dunst in a mature role as a depressed bride and a host of familiar faces attending the wedding, where soon, a planet would appear from behind the sun and threaten to smash into the Earth. I found this very interesting and then they released the trailer and I was hooked! Well the other day I got to see this and I have to say the first ten minutes were absolutely brilliant, although the meaning of these first images won’t make good sense until you have sat through two very boring hours of talking, mood acting and nauseating, unnecessary shaky cam. I can say I enjoyed the last five minutes too but, my goodness the filler in between the opening and final scenes was so lame (to me) that I was often distracted and thinking of other things to do. It took me about four hours to get through this because i was so bored I kept getting up to amuse myself with other things.

The story is told in two parts, the first part about Dunst’s character Justine, a clinically and continuously depressed young lady who is getting married to moony eyed Alexandar Skarsgard at a billion dollar country club. Well, they show up two hours late to her sister Claire’s anger, which apparently sets her depression into gear and she pouts and mopes and cries for the next hour. She also takes a bath on her wedding night, her mother declares her hate for weddings during the reception, she pees on a golf green, sexes up an intern from her company and then Skarsgard determines they can’t remain married and leaves for good. Did mention the irritating shaky cam? It’s awful. After the beautiful first ten minutes – why did we devolve into this? Terrible.

The next part is told from the perspective of Claire and her maddeningly irritating husband played by gravelly Keifer Sutherland. They have taken in Dunst who is so sad she can barely get out of bed, which is causing friction between Claire and her family, this is all exacerbated by the arrival of the planet Melancholia which is threatening to crash into Earth. Claire is so scared of this she begins popping pills and having Sutherland lecture her about getting on the ‘net and reading about the ominous end of times. We get shaky cam, horse rides,  the planet looming, looming, looming, a naked Dunst and then the end, which i won’t spoil.

The imagery at the beginning is beautiful looking, and as we go through the film and discover what they actually mean is absolutely brilliant. To me, it is worth watching again just for that. But…. living through the camera work, the dialogue and the situations people put themselves into that make no sense was enough to make me depressed for sitting through it.