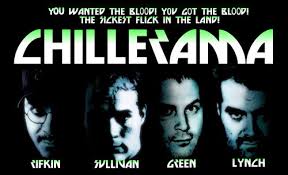 I have been waiting for this to come out for a long time – since I really dig  Adam Green’s films. What can be better than an  anthology of disgusting B-Movie parodies from Green (Hatchet and Hatchet 2, Frozen), Tim Sullivan (2001 Maniacs), Joe Lynch (Wrong Turn 2 {the best of that series so far}) and a dude named Adam Rifkin who I have never heard of or seen any of his movies? The theory is this: the local drive in which has been showing B- Movies for years is closing down and it’s going out with a bang – showing four of the gnarliest, gruesome movies ever, never before seen on American soil. It should be noted that the tone is set early: at the beginning a man digs up his wife’s grave to desecrate her corpse, and gets his penile gruesomely bitten off, complete with a shot of the back of his balls. After that’s done, he throws one of his testes on the wife’s headstone and he sets off to work the camera at the drive in. Next up we are introduced to the drive in manager, named Cecil Kaufman who ingests a bottle of pills and plans to blow his brains out. But – never the les the show must go on and he fires it up!

This beauty starts off with Ray Wise looking through a microscope at a bunch of sperm. His enormous chested nurse pops in and brings in a dude who has “sperm problems”. While normal people have zillions of sperms in a semen specimen, this poor fellow only has one. Wise recommends a non approved drug to increase his manlihood and he takes it. Soon enough, on the train, a well endowed babe sits next to him, cleavage and all and he gets a terrible burning pain “in his balls”. It happens again in his office board room so he goes back to the doctor and produces a new sperm sample, this time his one sperm is as big as grown man’s finger. “Stop taking the pills” Wise advises, “and, if you get aroused masturbate and get rid of it!” Sure enough, he goes on a blind date, spots some boobs and heads to the bathroom to work it out. This time it’s as big as my arm and has a life of it’s own – there is a very disgusting scene where he attempts to catch it squirming around the bathroom floor before he gets it in the toilet  Well that doesn’t stop it and soon it’s out of the toilet, gigantic, growling, spouting teeth and eyes. You don’t have to guess too hard to figure it heads up the date’s dress. They all scream and grapple with it and he sends it flying out the window – where it’s off into the streets, devouring a chihuahua and his mistress – this is actually hilariously gruesome.  Things just get bloodier and gorier and funnier from here on out – complete with awful looking (intentional) CGI, Eric Roberts, humping the Statue of Liberty.and the biggest “money shots” ever. AWESOME.

In the interlude before show 2, one of the movie watchers heads to the food court to get some “snackage”. The popcorn machine is out of butter so the little beauty working the counters goes into the back. She doesn’t notice that the guy who got his weenus bit off is using the popcorn butter to lube his self-pleasuring (with no cock??) and grabs the contaminated butter anyway. She dumps it on the popcorn and we’re off to:

Show 2: I was a Teenage Werebear by Tim  Sullivan ONE TOP HAT

This one starts off pretty weakly with a “Grease” inspired 60’s musical number, instead this time the dude is a closet homosexual and is “Looking Away” at the gay overtoned other boys around the beach at Malibu High, mainly the leathered tough dudes.  Before too long guys are wrestling on the beach and one of the punks subdues the closeted fellow and bites him. After the coach dismisses everyone, Ricky (the lead) does his own strip tease musical number in the locker room.  Well, the wrestling coach interrupts him and tells him he has the same urges too. When the coach goes to give him a BJ he crushes the coach’s head between his knees and brains explode everywhere. The non-gay wrestlers show back up and challenge the gay werebears to a fight. In the locker room again, all of the teenage dudes are in their underwear  and the lead wrestler begins to “copulate” with the lead werebear, “This is for you, Jesus.” he says as they do it.  This turns the werebears into werebears and the non gays are slaughtered. Soon they are all doing another musical number singing “Love Bit Me on the Ass”. I don’t know if I have ever really seen so many male assess and “junk”. Aside from that, this was not very good whatsoever… I especially hated the singing and dancing and didn’t find this one campy or “cultish”.

In interlude 2, it seems everyone that’s been eating the popcorn is getting the shits… and heading back to the concession stand for more popcorn. One of the movie goers decides to drop in on Kaufman for something or other and interrupts  his suicide attempt again. “Christ doesn’t anyone knock??” he yells and queues up:

This starts off in what I suppose is the attic where the Franks hid during WW2 with Anne reading through a hand written journal that the father explains is “his grandfather’s” – a record of an horrible experiment his grandfather conducted a long time ago – and the reason they shortened their last name to Frank…. from FRANKENSTEIN!!! Of course he yells that last word, the Germans hear him and bust through the wall, including Adam Green’s buddy Joel David Moore (collaborators on Hatchet and Spiral). as none other than Hitler himself. In short order, screaming every single word, he shoots everyone, steals the diary, grabs an empty one and tells his soldier to write depressing stuff in it that they can sell after the war and make millions. Later, in Hitler’s office, with the use of the diary, he has figured out that electricity is what it takes to make his genocide monster, so he and his busty wife Eva head into his lab to “create the machine that will turn the tide of World War 1”. “2” she corrects him. Apparently he was busy doing a jigsaw puzzle of puppy dogs and missed the first  one.  Anyway, soon the monster is built and he is done up like a gigantic, decomposed Hasidic Jew complete with long curly beard and Yarmulke and I think the actor here is Kane Hodder. The rest of this segment plays out pretty irritatingly, with Moore screaming his non German (this is all in non-German -German) as the monster brutally slaughters the Nazis and blood sprays everywhere. Then it gets a little dumb as Moore and the monster battle each other through the actual stage sets,ala Blazing Saddles ending with the monster ripping Moore’s arm off and killing him with it – before dancing the Hora. UGH – Not the best Green effort but I am sure it was fun for them seeing all of their inside jokes.

In the third interlude, we join a blotchy skinned movie goer eating the contaminated popcorn and  getting a noisy BJ from his girlfriend. As you might expect, he makes his emission without her approval, his face becomes covered in glowing, blue spots and he breaks her neck. As we pan around the scene, all sorts of people are glowing blue and lumbering around, eating more popcorn. In the concession stand two of our kids from out in the drive-in have met and finally get that first kiss. Ahhh. Back in the booth, Kaufman sends us a movie called “Deathication” which is, really a short film of people taking craps. which is totally disgusting. Thankfully we don’t have to see much of this as the dude who had his willy eaten earlier is trying to zombie-mount the theater owner. A fight ensues and the projection real is knocked over saving us from the rest of “Deathication”.

I figured that would be the end of the filth – but this was not the case. Now that the problem has been realized they really unload on us. Outside in the parking lot, everyone but a few people have turned into zombies and they are all F-ing each other. F-ing body parts, F-ing guts, F-ing everything.  There is even a scene with a boner being ripped off and zombie breast milk. I honestly don’t think I have ever seen anything like that. Back inside, the last of the humans in the projection room try to get out of there alive. While Cecil Kaufman unloads hundreds of shotgun shells and quotes famous movie lines, the two kids run out of bullets and decide to lose their (well his) virginity since they are going to die anyway.

I suppose my overall thoughts were that this was an entertaining two hours, but I was hoping for much better. Obviously these four guys took every liberty possible and had fun doing it, but there sure were a lot of inside jokes that were probably pretty fun for the filmmakers but not me. Oh yeah – I guess the “interludes” were Joe Lynch’s contribution as “Zom B Movie” which I would probably give THREE TOP HATS. I can say that there are more penises in this thing than in your average porn, mostly getting ripped off, eaten or  blown up. There is also a lot of pooping, semen, blood, guts, F-ing, breast milk, F-ing and more F-ing. This horror comedy anthology is in no way for everyone.