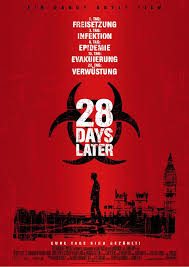 Has it really been eight years since I saw 28 Days in the theater? Wow… This movie totally blew me away that day. The commercials and ads touted this as “Roddy Doyle reinvents the zombie movie!” and boy he sure did (even though these are not really “zombies” as in undead humans, but are people infected with a virus called Rage that is transmitted through blood).  From the first five minutes into it to the very end this is a believable, well acted, fantastically shot, wickedly scored, tense, high quality, must see movie.

If you are unfortunate enough to not have seen this movie, this starts off with a poor gorilla strapped to a table being subjected to scenes of intense violence on several TVs when a group of animal rescuers burst in with the intentions of freeing all of the apes being experimented on. A researcher in a lab coat warns them not to do that since they are all infected with Rage – the thought here is to study rage in order to cure it. They don’t listen and bust open a chimp who goes wild and attacks one of the rescue crew. Within seconds she is spewing out blood all over the floor – and everyone else. Soon, everyone is screaming and going berserk and then they cut to a black screen with the words “28 Days Later….”

A fully naked Cillian Murphy (Jim) awakes from a coma in a hospital isolation chamber. Clothed, he stumbles around and out into the abandoned streets of London. Everything is trashed and wrecked and burnt and desolate when he eventually stumbles into a church filled with dozens and dozens of stinking corpses. He whispers “hello” and is set upon by a group of “Infected” and chased out into, and down the street – here I have to say that the score for this movie is wickedly effective in building tension and emotion. Luckily he is saved by some uninfected folks bearing Molotov cocktails and Boyle gives us a very impressive gas station explosion. Jim’s savior is a tough, I’ll-kill-you-the-second-you’re-infected-even-if-I-love-you lady named Selena (Naomie Harris) and a dude that doesn’t stick around much longer. They explain the Rage Virus decimated the country, everyone’s dead and the goal of life is now to survive.

As the story goes, Jim and Selena meet up with the always awesome Brendan Gleeson (Frank) and his daughter Hannah (Megan Burns) and they decide to get out of London and follow the recorded voice of Christopher Eccleston to safety at some army base out of in the country. Eventually they do make it there after some very well done encounters with many, many Infected and things don’t go well when they arrive.  The army fellows have their own designs for the two females, as well as Jim, and everything builds up to an amazing crescendo (yes I said it) of violence and revenge complimented with the ridiculously good theme music. The last 20 minutes of this movie are about as good as they get. Bravo, bravo, bravo I say.

The only gripe I could possibly come up with would be that I couldn’t find this anywhere to download in HD, so I had to watch a DVD on an HD TV and I could tell where their eight year old graphics were patched together. But who cares.

The sequel was produced by Boyle, but not directed – this time we get a bigger budget, bigger cast and a new director in Juan Carlos Fresnadillo. We also get Robert Carlyle, Rose Byrne, Jeremy Renner, Harold Perrineau, Catherine McCormack, Idris Elba, and Imogen Poots. The beginning of this movie is excellent (although not as good as the end of the first). Carlysle and his wife, McCormack are holed up with some other survivors in a boarded up cottage in the countryside when an uninfected shows up begging for help. They reluctantly let her in and soon enough they are being attacked by the ravaging Infected, all the while utilizing the score from “Days”.  In a harrowing, very sad, very effective sequence, Carlyle – Don – leaves his wife to the infected and runs for his life from the cottage with dozens of the afflicted right behind him to the river and jumps in a boat. As he speeds away, alive, the music fades and cut to black…

28 Weeks Later and England is once again under control, lead by an American military unit headed by Idris Elba. Survivors are bused in to live in clean and uninfected living quarters, armed guards are stationed everywhere, there are helicopter and plane flyovers and a very caring nurse, Rose Byrne. As it turns out, Don is the all-access facilities manager for the compound and his two children have just arrived.  They have a happy reunion, lament about their deceased mom and get a tour of the place. One of the parts that kind of let me down on this movie is that these two kids, both not in their teens I assume, escape this highly guarded, ultra-secure military compound and head back to their house. Really? Oh well – there they come across their still living mother who is immune to the Rage Virus and has survived all of these weeks of isolation.  She is filthy and ragged, but still alive, so the military clean her up and Byrne is going to study her to try and find a cure. When this news gets to Don, he is obviously torn up with guilt and heads to visit her. Since he has access to everything, he sneaks in and gives her a kiss. Well – she has the Rage – although immune and bites his lips off – reviving the incredibly contagious Infection inside the compound.

Before too long, Don has started to infect people who infect everyone else and now it’s up to the military to contain this problem.  Orders are given for the snipers on the roof to start taking out all of the infected, but they can’t really tell who is and who isn’t.  Eventually they are told to shoot everyone, but Renner can’t shoot the kids so he heads down to save them. In a grocery store, Byrne tells him that their mom is immune and these two kids may be the cure to all of this, so they team up to save them by getting them out of the city before the Americans napalm everything; which they do, but it doesn’t take care of the rampaging Infected in the subways. The rest of the movie plays out very well as they try to survive against the Infected as well as the military, all of this includes an awesome scene in a field involving hundreds of Infecteds and a helicopter.  The ending is left open as we hope for a sequel, which seems to be in the works called “28 Months Later” and may or may not be scheduled for 2013.

These were a really good couple of movies. Both are extremely gory and violent, both have very good acting which is pretty rare for this genre, both have tons of action and both use the music to build tension and atmosphere.  The first seemed more “independent” although I doubt it was but the second obviously had a LOT more money so it lost a little bit of the “specialness” of the first, but you can’t go wrong with either one.