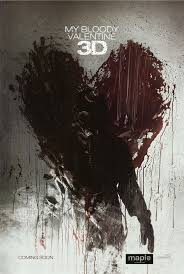 I have to admit now that I LOVE this movie. I love that they didn’t take themselves too seriously, I love Tom Adkins and his deadpan delivery, I love the over the top horror action, I liked the female cast members and the way they “acted scared”, I liked the update on the story and modern camera work, I liked the way the characters came into scenes of devastation that “had already happened” like the opening Hospital scene and that party in the cave and I just liked the overall piece of work. The only distraction for me was that the thing was shot in 3D (not even the “newest 3D”) so the gimmicks (eyeballs popping out, pick axes thrown at the screen, etc.) look a little out of sorts in the 2D Blu-Ray rendering. But – make no mistake, this is always a fun watch.

Over the opening credits we learn that a fellow named Tom Hanniger (Jensen Ackles) forgot to bleed a methane line down in the mine shaft which caused an explosion and killed a handful of coal miners. Once the mine has been excavated, it turns out the cave-in didn’t kill these people, it was a miner named Harry Warden who brutally murdered them with his pick-axe so they wouldn’t use up all the oxygen. As the credits end, Harry wakes up from his coma and Tom Adkins rolls up to the hospital – to learn that Harry is awake and has chopped up and dismembered what looks like dozens of carcasses littered across the rooms and hallways, as well as leaving a human heart in a box of candies. “Happy Fucking Valentines Day” Adkins mutters…. At the closed down mine, a group of what are supposed to be teenagers are having a party and we are introduced to Sarah – Tom’s loving GF (Jaime King), tough guy Axel (Kerr Smith) and his GF Irene (Betsy Rue). They head into the mine (Tom stays behind) and come across the massacre of dozens of the other party goers  – and Harry in full mining gear,complete with gas mask, chopping up everyone. Eventually Adkins and company show up and shoot Harry, causing another cave in ending the menace…. or does it….?

Ten years later Tom comes back to town to sell the re-opened mine. Axle is now the town sheriff, he is married to Sarah, having an affair with Megan (Megan Boone) and Irene is a hooker “But I am no hooker!” she screams. Anyway, before too long, the miner (gas mask, heavy breathing and all) is at it again: sticking pick axes in heads, pick-axing them into the ceiling, blood is splattering on walls and that “22 persons dead” body count starts rising rapidly.  The rest of the movie plays out as “who is behind that mask” brutally slaughtering half the town with his pick-axe? Is it really Harry? Is it Tom? Is it Axle? Who sent that heart shaped box with a bloody human heart in it? Why do I like that grocery store scene so much? Because it’s fun and well done, that’s why, just like this whole movie.