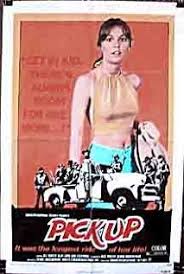 Pick Up is the second film in this “Grindhouse Double Feature” of “Two Sinful Shockers!!” issued by BCI Eclipse Company a few years ago, the first being the delightfully sleazy yet innocent The Teacher. I know a lot of people recall the 70s as nothing but Disco, but this movie is a slice of how I remember it – Hippies, Astrology, pot, flowers in your hair, free love, Paganism and general tripped out weirdness (of course I was a kid and didn’t experience any of that – but I watched a lot of it on TV).  Pick Up seemed to be going for the trippy-Pagan-witchcraft-weirdness with it’s swirling camera shots and blorp-blorp-blorp sound effects – and the Tarot reading witch, of course. Sadly, I didn’t find this as appealing or entertaining as The Teacher, but it gave me some nice nostalgia of the things we got to see back when I was young.

This opens up with a dude taking a leak on the side of the highway and, of course, like always, there are two young ladies playing in the grass just off the road. one of them, Carol (Jill Senter) gets brave and asks him for a ride in his groovy bus-style motor home while the other, the dark and mysterious Maureen (Gini Eastwood) warns to not take the ride because “He is an Aries and Aries is in a sign of turbulence!” Nevertheless and obviously they do take the ride, get stoned, Carol flashes some local hillbillies, has sex with Chuck and they get lost in the Florida Everglades. While Carol and Chuck are out exploring, having sex and and picking up a baby raccoon, Maureen gets visited by a slave of Apollo who gives her some sort of magic scepter and tells her it’s her turn to be his slave (or something) and she has some sort of orgasmic experience on a table out in the middle of the swamp.

There’s not much more of a plot to this movie unless the viewer feels the need to try and interpret the trippy flashbacks that (I think) are designed to tell us who the characters are (like the child molesting priest who has driven Maureen to the Zodiac or the football player who took advantage of young and innocent Carol) or the mysterious shots of birds and water rippling that I am sure meant something when this was made. Chuck and Carol have sex in the motor home, the swamp, a giant swing, even a tree and he even eventually does it with Maureen out on that table. Included in Pick Up, for some reason, is a politician running around campaigning in the swamp (who I think is supposed to symbolize the devil) and a clown I didn’t quite catch the meaning of.  Strangely enough, this ends with Carol getting killed by those same hillbillies from earlier and then it ends with the two girls sitting in the field again, getting picked up by Chuck, although this time Maureen is excited.

There you have it – I think this has something to do with the loss of innocence… Interestingly, it seems that none of these three main actors have ever been in anything else.