It’s usually unlikely that good horror comes out in the movie theater in the first place, so when this made it’s way to the theaters a few years ago, I went to go see it, even though I am not a big fan of the “torture” genre, and I was thoroughly entertained. A group of cocky American kids traveling Europe, getting ladies undressed and into the sack end up in a Hostel where their IDs are photographed and then they are bid on by all sorts of surly types who use them for torture, up to and including murdering them. Make no mistake, there is a lot of gruesome gore in this. There is also a lot of nudity and some decent acting.

So, yes – three dudes are travelling Europe, meet some hot chicks and end up being tortured and dead. One of them does make it out, with another hostage, but things don’t turn out too good for her, in a very surprising WTF moment. There’s also a guy who eats food with his hands, Eli Roth doing some crappy acting and even an appearance by Takashi Miike, the director of the agonizing “The Audition”. We also get Jay Hernandez and a good performance from a guy named Derek Richardson, who recently popped up in American Horror Story.

While this isn’t prefect, Eli Roth, writer / director came a long way from Cabin Fever with this production.

This time it’s three hot chicks (the lovely Lauren German, the lovely Bijou Phillips and the slightly weird looking Heather Matarazzo) prowling around Europe who end up in a different Hostel (same body trafficking network) and endure the same fates of the others in the first movie. It’s funny, Roth was chided for so much female nudity in the first one that this time there’s little, but we do get a close up of a giant schlong early on… anyway, the production values are way up for this movie, but, IMO the story seemed rushed and not as exciting as the first, as in, there’s WAY too much dialog in here, and much less “horror”. As a way of story, we get the three leads and then some insight into how the body trafficking network works. We have two Americans (Roger Bart who appears in almost every other movie out there and Richard Burgi who shows up in almost as much) who have bid on one of the ladies, win the bid, and head to Europe to do their grisly business. As human nature goes, one of them has a change of heart after actually meeting his intended victim, and things go awry. Oh yeah – as a personal fan of “montage” there’s a good looking, fun one in the middle of this.

P.S. Jay Hernandez makes a cameo in the beginning as the Elite Hunting Club finishes off a loose end from the first… Eli Roth mainstay Jordan Ladd also shows up briefly. 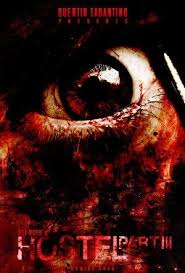 So, here we are again.The Elite Hunting Club is still up to it’s old business, but this time we visit Las Vegas with no Eli Roth in the director’s chair – this time it’s Scott Spiegel who, apparently, directed the uninspiring From Dusk til Dawn 2: Texas Blood Money. Anyway, this time it’s four douche-bags in Vegas for the character Scott’s bachelor party. They do a little gambling, win a little money and by the fifteenth minute they have been invited to a party “way off the strip” by two hot chicks (who is this Sarah Habel??) – in an ominous, vacant warehouse.  Well it does turn out that there’s a party going on in there – but is it legit? Is it a front for the Elite Hunting Club and it’s human trafficking network?

In this branch of the torture for money syndicate, human beings are drugged and tazed and hauled in front of a room full of high rolling gamblers who bet on things like “How long will he plead for his life because of his family?” and then gets his face scalpel-ed off, to the applause of the crowd, or, gross, gets eaten alive by giant bugs. There’s also a really weird scene involving a woman dressed in some sort of leather, spiky mask that is credited as “Japanese Cyber Punk”.  You know, this thing was going OK for most of the movie until the “main event” and that really unconvincing fight scene – and then everything really went downhill for the last 30 minutes, spiraling downward and downward into the shitty CGI ending and the actual stupid closing scene. Oh well, I’m sure there will be more of these, but this is easily the worst of the three.