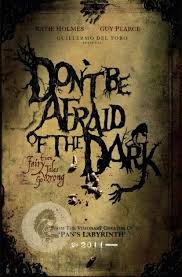 Two Guillermo Del Toro productions in a row – too bad neither of them were directed by him. Allegedly this is based off of an old 70’s made-for-TV special (that I have never seen) that inspired Del Toro to do a screenplay for and executive produce because he had been so tied up with The Hobbit forever (at the time). It is very apparent that he had more of a hand in this one, unlike Julia’s Eyes (below) because, if you’ve seen his stuff (aside from Mimic, I suppose) he has a very clear and sharp vision of the beautiful and fantastical imagery he delivers.  You can really see what he has envisioned with this screenplay, and probably his funding, as this sure is good looking. As well, while it’s been a few years, these “Tooth Fairy” creatures (called Homonculi) remind me a lot of the Tooth Fairy creatures from Del Toro’s Hellboy 2: The Golden Army, although these guys whisper sinisterly and entice little girls and boys into their lair. Also – I think the Hellboy bugs fly, although in this there is some sort of Celtic Runes above the doorway to their home, but I am not sure if they are supposed to be “Elven” or not.  Anyway, I do have to say that these creatures and their whispering was pretty effectively creepy to me, and probably would have given me nightmares if I had seen this as a kid, but, overall I wasn’t in love with the entire production.

For some reason, the normally super-awesome Guy Pearce seemed really, really out of place in this movie. I can’t really put my finger on it, I mean he’s done an American accent much better before, but he just seemed really, I don’t know, trying too hard – or trying too little.   I have only seen Katie Holmes in a couple of things, and I thought she was good in them, but she sure didn’t do a very good job in this, in my opinion.  Maybe her and Pearce don’t like each other, because neither of them had chemistry and they didn’t work as “individuals”… even with small things like hand movements and their “face acting” – maybe they were always hungover, who knows.  I remember when this came out, reviewers were calling out the performance of the little girl – Bailee Madison as the tormented daughter, but I personally thought she / the character was kind of irritating spending a lot of time bratty and a lot of time weeping. Oh well – I do have to say I was “disappointed”, but this is “good” if you’re into the magical and mystical atmospherics of Del Toro.

This starts off very promising: sometime in the days of horse drawn chariots, a maid is summoned to the basement of an enormous house. Going down the stairs, she trips on a preset twine trap and falls to the ground. Dazed, the master of the house comes at her mouth with a hammer and chisel – Chink! Chink! Chink!.  He offers up the teeth, in return for his son, to the whispering voices in the fireplace that leads deep in the ground, which doesn’t seem to satisfy these things as he is promptly pulled into the depths. Next up, in modern times, the daughter, Sally is moving in with Pearce (Alex) and girlfriend Holmes (Kim) who are fixing up this gigantic relic of a house.  Naturally Sally is a complete brat and “does her own thing” which includes griping and stomping around and sneaking into the basement to talk to the whispering voices behind the fireplace grate. These voices want to be friends and want to play and are all nice – and are hungry. Again, I think the use of the slithery voices is effective and creepy, but, sadly, before too long they come out of the shadows and I can’t say that I really cared for the CGI Homonculi.

Before too long, the monsters in the basement are not at all benevolent and they are shredding dresses, teddy bears and attacking the lawnscaper and no one believes her that there are things in the basement because she’s just a kid. Well, one night Kim spends the night in the room with Sally and experiences some weirdness (and we get the surprisingly oh crap moment form the TV spots) so she starts to believe, checks out the local library and gets the scoop (from the archives of the estate they live in). Apparently these creatures are from the Netherworld and used to come up and eat the teeth (and bones) of children until the Pope (ahem) made a pact with them in the 9th century or so, blah, blah. Now they only come out every now and then to replenish their race by stealing away with a human and turning them in to one of them. “One life mussssssssst beeeeeee taaakkkeeeeennnn…” they say.

As it goes, there’s a ridiculous, unbelievable scene in the home’s library and then a pretty cool drive to the end where something happens that I didn’t see coming at all – good stuff – but then the actual end is so eye-rolling that I can’t really believe they put that in there. Overall I felt that this could have been a lot better, especially if Del Toro had directed, or the actors had done better, or the creatures didn’t look so, I don’t know, stupid. BUT – this probably would have given me the willies as a kid. As an adult, I liked the imagery and the mysticism of it, but I could have just done without. As a public service that is our blog here, it’s a LOT better than the haters on the IMDB message boards / reviewers claim, but it’s certainly not “the end of everyone involved’s careers!!!”