If you can get over bad sound, bad synchronization, a synthesizer score by Tangerine Dream , bad 80’s special effects, old fashioned slo-mo and Jurgen Prochnow, this is actually not too bad of a movie from director Michael Mann. My friend and I used to watch this on video tape (what??) almost thirty years ago every other weekend and have a blast with it. Now that I am much older, this didn’t really make me want to watch it twice a month, but, nostalgia aside, this wasn’t too bad, full of loooooooooooong, sweeping, panoramic shots…. a very young Scott Glenn, an old-yet-young Ian McKellan, a not wonderful Gabriel Byrne as a Nazi – and everyone’s favorite German actor, Prochnow. For a movie about an ancient Jewish demon thing who manifests from a cloud into physical form to destroy the Nazis who keep killing his people, Scott Glenn with white “light” glowing from his eyes (this looks like they used a white marker to color in his eyes on the film strip) and very loud sound effects, this isn’t too bad.

Nazis move in to a small Romanian village, take command and set up shop in a gigantic bunker looking thing called The Keep which houses some sort of evil within it’s walls. At once, the German soldiers start digging crosses made out of nickel (they think it’s silver) (for stolen treasure) out of the walls. This, in turn releases the thing from it’s cage (in cloud form) which, in turn, starts killing off the Nazi residents of the Keep. After it’s first kill, somewhere else in Europe, blue-steel eyed Scott Glen wakes up – and light comes out of his eyes! Snap! Back at the Keep, the dutiful Germans have called in some back-up, mean and determined Gabriel Byrne shows up and starts shooting up the villagers – and someone or something has written something cryptic on the wall! Luckily the local Priest knows someone (a Jew) who should be able to translate it – Ian McKellan, so they find him in a concentration camp and bring him and his caretaker daughter to see what’s going on.

In the meantime, Glenn is tooling across Europe on his motor scooter, using his light-blazing eyes to blow Nazi guards away from him. Meanwhile, Byrne and his boys are getting antsy, and his boys are still being killed, so he demands McKellan gets this figured out – right now. Before too long, Glenn is sexing up McKellan’s daughter, the creature is physically manifesting itself, Byrne is shooting everyone, Glenn is going to use “The Talisman” to imprison or kill the creature once and for all, he is shot to pieces (green blood) and thrown off a cliff (but comes back to save the day), all of the Nazis are dead and then there’s the big showdown filled with a choir making music in the score as we ascend to the climax!

There is a LOT of highly pitched German (and McKellan) screaming in this which was pretty irritating, the sound was kind of bad all around (especially the gun shot sound effects), and Glenn’s acting was pretty stiff. Still, the story was good (apparently this is based off of a book), it was put together well (for the time), we got to see a boob, and this had a good nostalgia factor, kind of like watching Legend every now and then. So, if you can get over those things I mentioned earlier, especially the bad sound, this isn’t too bad. 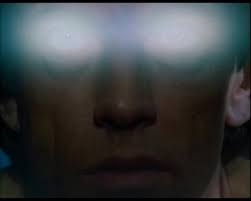