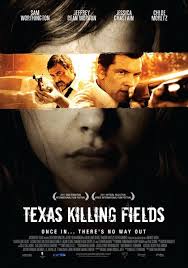 I could go on and on and on about how much I like Apple TV – but the one important thing to note here is that they have movie trailers you can watch in the convenience of your own home. With that, I saw this promo featuring the awesome Chloe Grace Moretz, the hmmmmm-I-don’t-know-why-you-are-so-popular Sam Worthington, the you-really-need-to-find-your-niche-buddy Jeffrey Dean Morgan, the you-need-to-just-play-Al-Capone Stephen Graham and the why-haven’t-you-been-in-more-stuff-please-make-some-good-horror-movies Jessica Chastain and I thought it looked very good. Whenever I have these high expectations I am usually pretty let down and, I don’t know, this weirdly “didn’t”, but I can’t recommend you watch this before Amber Lake or Small Town Murder Songs. To boot, this thing is like the Yin and Yang of movies: it looks very good half of the time, but half of it is filmed at night in pitch black so you can’t see what’s going on, the actors all look and face and character act very well, but not a single one of them come close to pulling off the West Texas accent this calls for (especially Australian Worthington) and the characters just kind of change their personalities off and on throughout the thing – one moment Morgan is crying to his wife about not praying hard enough for “the girl”, a little later he is beating the shit out of some dude for not giving him a ring from a severed hand. Also – this seems to be a little bit of drama, a little action car chasey-shoot-em-up, maybe a little Se7en-ish? Anyway – this is about how I felt during “Fields” up til the neutral-face-smiley ending: (oh yeah – there’s a lot of back-story for all of the characters that is not explained whatsoever, which is OK – but it’s kind of difficult getting to know them when so much has happened in the past). So Morgan and Worthington are cops in Texas City, TX who may or may not like each other. About a quarter way through we learn that Morgan is from New York and doesn’t know Jack Crap about life in West Texas (later it is alluded to that he may or may not be “disgraced”) and his “city-ways” need to change. Worthington may or may not be a dickhead, but he sure loves his dog, Chastain is a detective there too, is Sam’s ex-wife (they don’t get along) and Moretz plays a strange, mopey teen whose mother is a drugged-up hooker, her dad (Graham) the dirty, filthy pimp and has a brother who reminds me of the squeal-like-a-pig fellow from Deliverance.  Once I finally got over the horrible renderings of a southern accent, this movie was kind of good – keeping in mind half of it was lit only by moonlight and I had no idea what was going on. One last thing – this is “inspired by true events”.

Here we go – the body of a dead girl turns up in the swamp lands of West Texas called “The Killing Fields” where, for centuries, things have just gone plain bad for anyone who goes there, including a tribe of American Indians who got marooned there and resorted to cannibalism, according to a cell tech in the middle of the movie. Morgan takes this very personally (I guess for whatever reason that caused him to move from New York) and he and Worthington get on the case. We are introduced to the host of other characters, mostly vile,  and then another body is found and things start getting dubious in the “low income” part of town where – per the script – “white people don’t come around”. As Morgan tries to figure things out and Worthingon eats chicken, drinks beer and butchers a Southern accent, there is a pretty intense home invasion scene and then another person goes missing. In a side story, Morgan has taken affection to Moretz (this is not my favorite performance / role by her), he keeps picking her up from school and having her over for Sunday prayer / dinner. In another side story, there’s something going on with a tattooed white dude and a mysterious muscle car, some stolen license plates (what is this a huge metropolis?), a man from the “low income” part of town with a long, twisted beard and a woman covering something up. In yet another side story, Mortez’ mom, heinous dad and brother are operating some sort of drug-brothel in their crumbling home and something’s just not quite right with the father.

To make a paragraph break, eventually Moretz goes missing and, for Morgan, the hunt is on, while Worthington is back in the town chasing down the muscle car and shooting things up all over the place. This starts the third act, which does have a nice “twist” (if you can see it) but then gets, honestly, disappointing, but, maybe OK, I guess, well sure, I guess. I liked how something happened that I couldn’t (literally) see coming but that wasn’t too inspiring of an ending for a movie that could have had “caliber”. I suppose there’s a reason things go straight to DVD / Streaming / Download these days, because this probably didn’t do well with focus groups, I mean I think I would watch it again for free on HBO but I would also probably up and leave if something else came up or I had the urge to go to the gas station and get a hot dog, which is not my first choice of lunch to say the least. I wish everyone well and these people all have bright futures, but… this could have been a lot better. I think.

One last note – REALLY? When the killer calls Worthington from a cell phone for the last time, he “hangs up” and we hear a dial tone. REALLY? Come on now people.