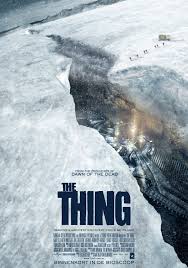 There seems to be a lot of hate for this movie out on the IMDB “butchering Carpenter’s visionary classic” and I am really not sure why. Considering the sets were built to exactly match those of the 1982 Kurt Russel “Thing” and, if you’ve seen that Thing, then you would realize that this Thing is, basically, the exact same Thing, just with Mary Elizabeth Winstead in the lead. For real, if you take out the “spaceship” Thing and the horrible CGI Hollywood using, this is almost a replica of Carpenter’s Thing (which is basically a remake of the 1950s “The Thing From Another World”). Set in the snowy, windy and remote Antarctic outpost, a group of scientists / archaeologists uncover something frozen and alien, it / something gets loose, the alien starts to take over the humans and turns them into hideous Things, everyone freaks and flamethrowers are used constantly, we get the same “we have to check our blood” moments (granted this time it’s with teeth fillings), we have an incident with a spacecraft and we get down to the last two people.  I don’t really recall the beginning of Carpenter’s Thing, but as this Thing’s credits roll, it is supposed to be the beginning of his Thing – which seems cool to me. 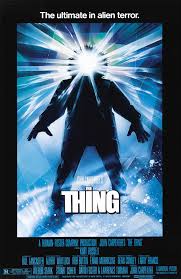 The Thing that I liked best about Carpenter’s Thing was, first – I was a kid and the special effects scared the shit out of me, second – I liked the music and the tension and it felt so cold and bleak and we were left with the big “what’s going to happen next” cliffhanger ending. It also had cool-ass Kurt Russell, Wilford Brimley (of all people), creepy Donald Moffat and the lone, tough guy Keith David. This one gives us Winstead,  Eric Christian Olsen, (“OZ”s Adebisi and a bunch of bearded Scandinavian dudes.  The setting is the same, but, as a prequel, we get to see the Thing’s spaceship, buried under the ice for – ahem – 100,000 years. Why the “ahem” – because, towards the end of the movie (no spoiler) one of the Things fires it right up. They extract the Thing in a block of ice and take it back to the outpost to give it a good study and wouldn’t you just know it – it thaws out, gets loose and starts turning humans and dogs into Things. While the ’82 version took “real” gory special effects to new levels, I felt cheapened with the CGI Things they gave us here and felt that it could have been a much better movie if they would have just used some damn props. 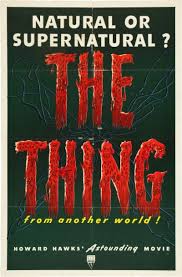 Just like in both movies (I have never seen the original), Things are getting into people and becoming them and gruesomely attacking their prey – just when you think it’s safe of course. Since people are becoming horribly disgusting Things, no one can be trusted and the only logical source is to “isolate the virus”. In ’82, they had a cool scene in the, I don’t know, “lounge” where they tied each other up and tested their blood with a flamethrower-hot piece of copper – which lead to the discovery of a Thing and an awesome torn-off-head-Thing crawling around  all over the place. In this Thing, they plan on doing the blood test, but someone or something burns the lab down so – they go with the next best test. The Things can take over life at the cellular level, but it can’t reproduce things like metal fillings, so there’s a scene in the “lounge” where Winstead goes around checking everyone’s choppers. This is actually probably the best part of the movie – and it goes on for a little bit – which was good – but then everything gets sullied when they reproduce the head-tearing-off-thing and it merges with Christian-Olsen and it becomes a stupid looking two-headed Thing. I believe, in the ’82 Thing, they find this monster out in the snow and that’s what starts the all of the atrocity – so I say well done there, setting that up.

Well –  this thing is going long and I need to find something to eat. I didn’t think this thing was that bad but it could have been better, to me, without so much CGI. I think the ’82 was better, but I’ve also seen it 1000 times (well maybe not that many), so, it might be time to give this Thing a new run and watch it again, and maybe again.