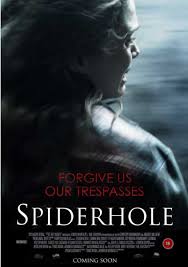 I have been passing this up for several months now, mostly because the poster that came with it reads “If you liked HOSTEL or SAW, you’ll like SPIDERHOLE”. Well, I kind of liked the Hostel series (hostel), I could never get into the Saw films, the log line didn’t get me too interested either: “They say squatting is dead – a term that takes on a sinister double meaning when four homeless art students decide to take up residence in an abandoned London House where a hidden terror lurks.” and the trailer didn’t make me want to rush out and rent it or download it on iTunes, but I have to tell you, I liked this movie. I think it was missing something – and I can’t really tell you what that might be – but I really liked the end – and I REALLY LIKED the song over the credits – but, maybe, I got kind of bored for parts and, even though it was actually believable despite we don’t really know why these things are happening to these English “squatters”; if I was in this situation, I would have been busting out of that crumbly, bricked up window as-fast-as-possible, but they did not. But then again, if they did that, we wouldn’t have the movie progress as it does, now would we? If you only want to read this first paragraph – Spiderhole isn’t excellent – but you could do much, much worse than spending five bucks to rent this. I would watch this again, for sure (for free) (or pay for subscription television) (which isn’t free but they’ll never show this on the U.S. no-pay stations) (well maybe they might in forty years). Stop – if this comes out on HBO or something, (which I am already paying for) I’ll watch it!

Four English youngsters (two good looking chicks and a couple of strange looking dudes) decide to go “squat”  in an enormous, abandoned London-again-I-don’t-know-for-sure-housing-unit-that-looks-like-an-abandoned-apartment-complex. They’ve given up work and paying for food and paying for water and decide to go live in someone’s vacant, decrepit home and just do some painting and drinking and screwing and vodka drinking and pass out after the first night and find themselves welded in. On day two they all freak out, blame each other for whatnot and then one of them goes missing. There’s actually some interesting proceedings that happen and then another goes missing and we get the “Saw” type Torture Porn which is pretty tame and off-screen.  Soon enough we’re down to the last one and the filmmakers give us some good camera angles, long sweeps and a hint at why this is happening. Here’s where I can spoil this or not, and I won’t because the end was kind of fun (I didn’t expect that) and, for real, the Cover Song for the credits is – well – makes the whole movie (to me).

Aside from an eye-pull-out, this isn’t too gory, the actors are all believable and the camera work is pretty good. It takes a minute to figure out why this person is doing this, but it kind of makes sense (at the end) and then the actual ending-ending really worked for me (which is rare). The actors here probably have good work ahead of them (who doesn’t start off in a horror movie?) and I think the filmmakers do too.  I also think it’s time for some dinner and if you’re looking for some claustrophobic, bloody fun on a Friday night, you can’t go too wrong with this. If you’re looking for some “smart, thrilling, excitement” there’s other things you can find reviewed on here that might be more worth your money. Otherwise – Spiderhole isn’t too bad.