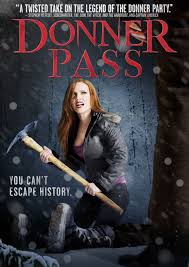 For a low budget movie about cannibalism with a load of not-seen-very-much cast members, Donner Pass actually has some good stuff in it, although that movie poster is not one of them.  In fact, this poster, coupled with The Man Who Collected Food, makes me want to finally fork out the money for some graphic design software and make my own covers – and I might just do that with my bonus money and add some new atmosphere to the IPC. (Hey wife – if you read this – surprise!) Anyway – this movie has little slices of goodness here and there – but they are, pretty much, immediately followed by clunking badness that takes away from what could have been the set up for a good franchise (they do set it up for a sequel…).For example – we are introduced to the extroverted, jerky Mike (Colley Bailey), his good looking, red headed girlfriend Kayley (Desiree Hall), the shy, creepy, yet kind-of-cool-IMO Thomas (Erik Stocklin) and the pissed off 4th “lead”, tag along Nicole (Adelaide Kane) driving up to Donner Pass for a weekend of skiing. The song over the opening credits is pretty damn good, the scenery is good looking but we get a bunch of shitty dialogue. We get past that to a scene in a diner that appears interesting but, since we know this movie is about cannibalism, we have to endure a good minute or two of slurping and smacking on BBQ ribs (eyeroll).  Another: they fire up a promising half-naked-in-the-hot-tub-in-the-snowy-mountains make out session (with some cool underwater shots) but the dude has had too much to drink so he has to go piss, “I’ll write our initials in the snow!” he promises, and then does… “Aaaaaaaaaaaa….. Jaaaaayyyyyy…..” yawn. Or how about this, in a tense scene involving some uninvited and unwanted guests, tough guy to shy guy: “I like to do two things, drink and fuck people up, and I’m running out of beer.” (moment ruined). So – Donner Pass is all right (a well done sledgehammer to the the chest moment) and also not all right (they are digging out a car out of the snow and we definitively see the tires are slashed – “he slashed the tires!!!!” someone screams – K got it) but it is better than some of the other bullshit I’ve sat through. Three TH.

So, the four folks I mentioned earlier (let me say that Desiree Hall was the best thing about this movie) head up to Thomas’ parents cabin in the mountains for a ski trip. As they settle in, a group of five or six other twenty somethings show up uninvited and tensions begin. As noted, they run out out of the good stuff (beer) so one of them heads into town to get some more – but never comes back because he gets shot in the head and runs off the road. The next day the few people who are not hungover head off to look for him – this is actually kind of cool – of the few who stay behind, two of them head for the hot tub and the other two stay in the house for a big “your best friend ‘made unwanted sex to’ me while I was passed out at a party” revelation. This goes to the side (to come back later) as the search party returns with the one guy’s mutilated corpse and the chick in the hot tub gets killed while her boyfriend is practicing his snow writing.

Here I should digress and mention the forgettable pre-credit opening sequence where the whole “Donner Party Disaster” is acted out. Cut to the credits and then the shitty dialogue I mentioned – talking about “the curse of George Donner” and that if you eat someone you absorb their life source and blab, blab, blab, blab.

Back to the story: with two of the contingent deceased, they all immediately conclude that Donner himself is preying on them and head to dig the car out of the snow and get the fuck out of there – but damn those “tires are slashed!!” and it’s 50 miles uphill both ways in two feet deep snow (people younger than me might not get that reference) so they’ll have to take their chances and fight him off. As anyone who has seen a horror movie of this type knows that the remaining survivors will get whittled down to one or two or three and then there’s the big finale which these days come with a pre-required twist ending. Sure enough, like this whole movie, there’s a twist which is kind of cool, but the explanation is kind of dumb and blammo, set up the sequel.

Like my grandma used to say about any sort of bump on my skin: “It’s probably a seed wart, honey.”. I think that’s what we have here, a decent enough movie with a bunch of seed-warts. Honey.