Holy Shit – was this really released in 2000? That seems so long ago…. wow. I guess, looking at it now – it does look a little dated – a little “90s” if you will with some lovely 90s grunge apparel and 90s hairdos, a lack of CGI creature effects and CGI blood, lack of cell phones and crappy “we can’t get any signal” gimmicks. Here we get real stunt people, a special effects crew (and a person in a werewolf costume), real corn syrup blood and a pretty decent movie. Let’s get this one thing out of the way: yeah I know this is a movie using “turning in to a werewolf” as a metaphor for a girl going through puberty, but let’s just forget that business and concentrate on a good werewolf trilogy, because there’s really not that many of them.

This movie starts off with a woman raking leaves in a quiet suburb with a sloooooooooow pan to her son playing in his sandbox – with a chewed up raw, dog’s paw!! Cut to the messy chewed up dog and cut to our two heroines, Brigitte (Emily Perkins) and Ginger (Katharine Isabelle) who like to take pictures of themselves in a variety of poses of them dead: impaled on a fence, hanging, dead in the freezer or tub, etc. The opening credits roll over a pretty damn cool montage of dozens of pictures of their  “Death Project”, which turns out to be a presentation they put together for some sort of unexplained high school endeavor. Rolling into the future, we learn that the two sisters are the school outcasts, blah, blah and there’s something going around the suburb tearing dogs to shreds, locally called “The Beast of Bray Road”. Well our two young ladies are three years late for their periods, but Ginger finally gets hers and, well, The Beast of Bray Road follows that up by getting her.  Brigitte fends the werewolf off to which it is subsequently hit by a van, driven by the local pot dealer Sam (Kris Lemche) and splattered all over the place.

Spoiler in the next paragraph.

The next hour deals with Ginger’s transformation from gothy tough chick to a sex and blood crazed girl with changing facial features and a tail while Brigitte and Sam try and find a cure. There’s nothing really that amazing to report about aside from some cool “real” special effects: the tail, her spine, tons of blood and guts all over the place. In the end, they figure out a “cure” (to be featured in the sequel) but it’s too late and Werewolf Ginger meets her doom.

I suppose it’s not correct to say “I’ve always liked Emily Perkins” because I’ve only seen her in these three movies but I’ve always liked Emily Perkins and I would like to see her in something else.  Katharine Isabelle is a good looking young chick who seems to have been in tons of stuff I haven’t seeN and Lemke plays the exact same role in Final Destination 3.  I guess, if we’re talking about the cast, Mimi Rogers has a turn as their mother and a cute girl named Danielle Hampton is Ginger and Brigitte’s snotty nemesis. All in all Ginger Snaps wasn’t too bad but I liked it better the first time(s) I saw it.

I suppose I should get the disclaimer out of the way – I understand this time around the “Lycanthropy” is about addiction (with a sub-metaphor of sex), but I’d rather talk about this in the terms of whether or not this is a good sequel to a decent werewolf movie, instead of putting on my finest tweed jacket and dissecting the symbolism of every camera shot and prop. As we all know, traditionally most horror movie sequels suck ass (think Descent 2 or Cabin Fever 2 or the Feast sequels), but I remember watching this seven or eight years ago and thinking this was better than the first. When I recently watched the first, obviously, I thought it was dated and liked it better the first time around. I liked this second one more, again, and if we had a decimal point system here,  I would give Ginger Snaps a 3.3 and this something like a 3.7. I think the contributing factors to this would be that Ginger (Isabelle) was killed at the end of the last one so Brigitte (Perkins) gets a lot more screen time (which is fine by me)  and we get a great performance by a (then) young actress named Tatiana Maslany – who plays the character Ghost. Another positive – since this is a Canadian flick, not only do we get a few references to the sport of Curling, but someone also gets the business with a Curling Stone.

When we start up here, we find Brigitte on the lam, hiding out in various hotels for a while until the Big Bad Wolf finally finds her again because – no spoiler – he wants to mate with her.  I failed to mention in the first one: towards the end, Brigitte takes Ginger’s blood into herself (to lure her into a trap with the cure – an herb called Monkshood or Wolvesbane). Right – so Brigitte now has the “curse” and goes place to place hiding out from The Wolf, ingesting herself constantly with the Monkshood concentrate which prevents her from “turning”.  What she does, see, is cut herself across the arm with a long knife and then gauges how quickly it heals; the quicker it scars up, the closer she is to turning into one of the hounds of hell, to which she needs to shoot herself up some more. One night, close to the full moon, she takes a double dose, The Wolf finds her, rips a librarian (Brendan Fletcher) to shreds and she passes out on the side of the snowy road, waking up in a clinic for drug addicted girls (deprived of her herb juice).

Here she meets the clinic director (Janet Kidder), the awesome Ghost (who is the sister character in this movie), a cocaine addict named Beth Ann and, of course, the Paul Walker looking orderly who works in a clinic for drug addicted women and trades drugs for BJs and sex (Eric Johnson). We also keep the Ginger in Ginger Snaps by having Isabelle appear as an apparition encouraging Brigitte to just accept and embrace it. Soon it’s the full moon and The Wolf is upon them at the clinic, so Brigitte and Ghost escape and head to Grandma’s Cabin in the Woods (I like the clever reference). There, they bond like sisters but wouldn’t you know it, The Wolf finds them and we all have to deal with that problem once and for all (or do we?). 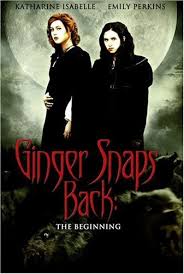 I thought I remembered this being the best of the bunch, but I now retract that statement and say this: “That is not the case here.” I was surprised to see that this has the same production year as “Unleashed”, but I can believe it…  this looks very hastily made, the script isn’t very good, Perkins and Isabelle look and act like they are tired-of-this-let’s-get-this-shit-over-with-already and  it doesn’t look like anyone had a lot of interest in this except for a guy named Hugh Dillon as the Preacher and another fellow named J.R. Bourne as the A-Hole Alpha Male of the trading fort.  Even though it looked like the 90s, the first one was pretty good in its idea and take on the werewolf genre and the second, to me, was better (especially after seeing this one again) with it’s creepiness and good acting. I thought this was boring, reaching, way too long and unnecessary. Like I wrote on The Descent 2, I am glad I have this blog now so, in ten years, if I feel like watching these movies again, I’ll remember to just go ahead and skip this bottle of hot, stale beer.

This time around it’s 1815 and Ginger and Brigitte are wandering around the frozen, untamed Canadian frontier on horseback; the explanation for this is lamely explained twenty minutes later and isn’t really important. Eventually they come across a torn to pieces, covered in blood Canadian Indian campsite where a creepy old witch gives them a premonition and they run off on foot. Soon Brigitte gets her leg stuck in a bear trap, they end up in trading outpost inhabited by nothing but men, there are graves everywhere and sure enough Ginger is bitten by a little boy who is infected with werewolfness.  Next up we get a lot of religious jargon about sins and expulsion and mercy and begging and inflictions and everything else: “You were born of the fire and into the FIRE YOU SHALL RETURN!!!” Etc.

Having had enough of that, the sisters make their escape and run into the witch again and Brigitte eats some sort of herb that sends her to the spirit realm and she comes back and Ginger has killed the witch and then there’s the big showdown back at the fort and Ginger is the queen or mother of the werewolves or something and before too long everyone is dead, including my interest for this movie. For being a prequel, this really doesn’t do shit to explain why the events are happening in the year 2000 other than it’s the same characters 200 years before. I guess they do say “together forever” a dozen times to get the point across.

To conclude – if you made it this far through these 1700 words, I applaud you – and two of these movies are worth a pizza and beer night, but skip The Beginning, unless you just HAVE to complete the set.