I’ve been unusually busy up at work lately so I haven’t had much time to do some movie writin’. I figured I could either post nothing and give everyone a break, but I asked someone what they thought and they said “Post some old stuff, those are always fun”. Since I have one fan who likes me to keep coming around, and I took a shit on my IN BRUGES piece, here’s one of my firsties that only one person has ever read. Notice how different these posts these days are… This also holds the significance of my first ever “Stranger Comment” (not someone on WordPress) coming from a human being calling them-self “Ding Dang”:

Then, not today, of course. 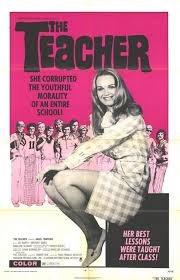 A few years ago, Quentin Tarantino and Robert Rodriguez got together  and made an expensive, movie-star filed homage to the old drive-in, crappy reel to reel movies, packaged as a double feature with fake trailers in the middle, and they called it “Grindhouse”. I don’t remember it making a bunch of money but a couple of the fake trailers were made into full length movies (Hobo With a Shotgun and Machete) and a bunch of production companies started cranking out new exploitation flicks. As well, movie companies that had been sitting on the rights to these sleazy films started putting them out in bunches, and, since these are the movies I liked to sneak into when I was a kid, I ordered a whole bunch of them (although I haven’t watched very many). “The Teacher” came as a double feature paired with “Pick-up” and I thought I would give it a shot. I have to say, the first twenty minutes of this are much more “exciting” then I expected for a movie about a “teacher who corrupted the youthful morality of an entire school!!”

This starts off with a hilariously serious, flute filled song about how “every boy needs a teacher” to teach him about life and love – the kind of teacher we read about almost every day in the paper getting arrested. We open to the song, and a crazy youth named Ralph who seems to live in an abandoned warehouse with all of his things in a red velvet coffin. We jump to some boys leaving school for the day, saying goodbye to the very attractive, blond teacher (Angel Tompkins as “Diane”) and we watch her pull away in her nice, teacher salary Corvette (mm-hmm). She explains (later) that she is aware that Ralph is stalking her, but she heads to her teacher-salaried boat (where is this school district??), motors out about 100 yards and nude sunbathes anyway. Not far away, of course, Ralph is ogling her through his binoculars when his brother and friend Sean show up to check her out as well.  This doesn’t go over well with Ralph and – as he snatches his binocs back, his brother falls off of the fire escape landing to his death. Surprise – I didn’t see that coming!

With all of that preceding it, by minute 35 or so, Diane is seducing Sean who has come to her house to earn a little cash. First she gives him a pop-top can of Coors and then makes him kiss her on the lips. While he heads out to fumble with some sort of garage siding, she takes a shower, does some topless thinking and calls him into her room to give him a massage and unzip his polyester shirt. It’s no surprise that Ralph the stalker is behind every corner and outside every window, so this doesn’t go over well with him. Before you know it, Sean and Diane are out on her boat drinking more Coors, Ralph is digging his snorkeling gear out of his coffin, they do the nasty and the stalker is on the boat, threatening them with a spear. But… he has a change of heart and heads back to the mill or wherever he lives.

I don’t think I need to go too much more into this, but there’s more sexin’, more altercations from Ralph, death threats, Coors drinking, that theme song and more boobs and sleaze than you can shake a stick at that makes Cameron Diaz’ attempt as a “Bad Teacher” look like a mildly sinful teacher.  Eventually, Ralph kidnaps Sean at bayonet-point and takes him to the warehouse / mill for the big showdown, where Sean is killed with a good old fashioned neck-break. Soon, Diane shows up and is also threatened with the bayonet, until he puts it down and appears to dry hump her – while sobbing – . Crafty, she sticks him with the weapon and we end as she bawls out on the landing holding Sean’s body.

I am surprised that I actually liked this movie. Maybe it’s the nostalgia factor, but for this blog, this is a ton better than “Nude for Satan” a 70’s counterpart, but honestly, it’s even better than some of the newer stuff I have seen. The acting is cheesy, the sound is annoying, the saxophone incidentals are hilarious and the theme song is hilariously awesome (the credits are clipped in this so I couldn’t catch the title) but the movie is pure in what it is trying to accomplish – sex, violence and Teachsploitation. Did I just make up that word? If I did – I should get credit.