Our story goes . . . one particularly uneventful Saturday evening, on a particularly starry night, in the early weeks of 1981, two boys, having never met, watch the same episode of BBC’s The Hitchhiker’s Guide to the Galaxy. Hours later, they both dream the same dream of being Arthur Dent (and totally making it with Trillian) when Zaphod Beeblebrox initiates the Heart of Gold’s Infinite Improbability Drive. When they awoke, their fears that the dream was real are found untrue. Their lives have not been altered and life goes on the same. Until one day, quite recently actually, each still unknowing the other exists, they arrive home and discover that their easy chairs have been turned into boxes of pristine 1980’s video cassettes. And their bags of Tostitos’ and jars of dip, fully functioning VCRs and remotes. They take to Twitter and it is here that the Eric from The IPC and David from That Moment In find each other and learn of their random, connected fates. A note in the box reads:

You must watch every 80s movie in this box. For each movie, a summary would be nice. Nothing crazy. Maybe something short. Your call. Then you must review the film! To do so, choose and describe these five moments: 1) The Best Moment 2) The stupidest Moment 3) That Special 80s Sexy Moment 4) The Now’s A Good Time to Take A Pee Break Moment and finally 5) The Most Cheesiest Silly Awesome Eighties Moment. Good luck. We are watching you.

I remember as I kid I would buy superhero comics for two reasons: (1) I loved to draw and was fascinated with the amazing art in the pages of these books, taking me to far away adventures, and (2) Boobs. If you haven’t read a comic book in your life, then you might not understand that second one, but trust me when I tell you that the “amazing art” I mentioned in reason (1) is mostly centered on the spectacular anatomical dimensions of the totally made up female forms in comics who are basically wearing painted-on costumes. A boy could learn a lot in these pages. Then came cable. As it were, back in the days before the internet and search engines, cable became an all new haven for let’s say, inspiration. One learned to sit through hours of terrible movies for a few seconds of unpauseable glorious flesh. Countless teen sex-romps filled the airwaves, but also dramas and action-adventures and comedies, and more. It was a treasure trove of cheesy fun. Some of the best were the fantasy titles, especially Marc Singer as The BeastMaster, which was a whole new level of 80s greatness. But it was only a preamble to the finest white person lords over the animals genre flick. That honor would go to a masterpiece of cinema corn known as Sheena, later called Sheena: Queen of the Jungle. With tons of dopey fun and over-the-top ridiculousness, Sheena became the gold standard for a guilty pleasure, and remains so today, thanks mostly to the stunning Tanya Roberts in full epic nudie glory and total commitment to the role of a white woman who rules the wild lands of Africa. Let’s revisit Sheena: Queen of the Jungle.

Quick summary: A cave-in the mystical healing Gudjara Mountain kills an archeological couple leaves little blonde-haired Janet an orphan, which for the native Zambouli tribe believes is a prophecy come true, claiming she is the child of the gods and so name her . . . Foxxy Brown. Just kidding. Sheena. She learns from the Shaman, a priestess in the village how to telepathically communicate with the animals. Hijinx ensue.

Everyone loves a good prison breakout, right? In the movies at least. Well, there’s none better on film than when Sheena and her jungle friends rescue the Zambouli Shaman after she is wrongfully imprisoned for the murder of the country’s king. If you’re thinking this is a slow-moving anticlimactic farce with a half naked blonde girl riding a horse painted like a zebra named Markia, while inept guards are fooled and totally dispatched by chimpanzees named Tiki and Chim that trip them as they walk in a door and features an elephant named Chango that knocks concrete walls over and can incapacitate a helicopter all under the soothing sounds of music you hear in a dentist chair then I have news for you. You’re absolutely right. And it’s glorious.

The Stupidest Moment:
Not long after the daring-do escape, Sheena realizes that two men she saw at the compound, a rather dashing dude who punched a guard and his chubby comic sidekick, have followed her into the jungle (savanna). They want to tell the world about how the Shaman is being framed. Not guessing that “moved far ahead” means the lady kicked the proverbial bucket, the dashing dude agrees to follow the hot jungle princess into the wilds because what sane straight man wouldn’t? Oh right, the chubby comic side kick. But just as that plan is being made, the bad guys arrive with automatic weapons. Within feet of the unarmed trio, the goons open fire like Arnold at a Predator and shred those people into a bloody gooey mess of–err, no. Actually, it seems they’ve encountered some strange gravitational vortex that forces projectiles to arch straight into the dirt because every single bullet thuds into the ground at their target’s feet like Neo was bending reality in the Matrix. Fast forward.

The Special 80s Sexy Moment:
It would be very tempting to highlight a number of times when the lithe and leggy Sheena takes to the cool waters for a bit of a bath, but the best, most 80s sexy moment come as we are first introduced to the adult prophetic goddess. As the camera speeds along the open plains, in rides the the lovely queen mounted on her trusty zebra steed. Up and down she bounces, her ample, loosely garmented underthings bodaciously bobbing beautifully. It’s the stuff of lucid wet dreams.

The Now’s A Good Time To Take A Pee Break Moment:

The bad guy is (*Spoiler*) Prince Otwani (Trevor Thomas), younger brother of the slain king and the guy behind the slaying. He’s after Sheena and the dashing dude with his black-beret-wearing, terrible aiming militant types, led by a white-haired scar-faced goon named Colonel Jorgensen (John Forgeham) who enjoys high volume slaughter. At one point, while hunting for the two with a turret-mounted helicopter, they come across Markia (You remember? The zebra painted horse) and open fire, missing it so badly, one wonders if every solider in the bad guy army are actually undercover agents working for Sheena. To protect the horse, err, zebra, Sheena and the dashing dude surrender and instead of taking the two in the helicopter back to base, they march them across the plains, but do so in the most adorable way, letting the two hug and talk and daydream about living in New York City eating peanuts. It’s so awful. Pee break.

Oh no, the dashing due get separated from Sheena and loaded into a transport jeep with one guard in the back riding with him. He puts a pocket cassette recorder on the bench across from him and tunes in some epic 80s generic dance music that is serves like the snake-charmer’s pungi in utterly transfixing the moron who, so beguiled by the wondrous modern invention, lunges at it like its the last ticket to a Devo concert. Of course, the highly trained mercenary is immediately overtaken by the city journalist and tossed out of the moving truck while the driver (in an open top jeep I might remind) drives on oblivious. Laughable. 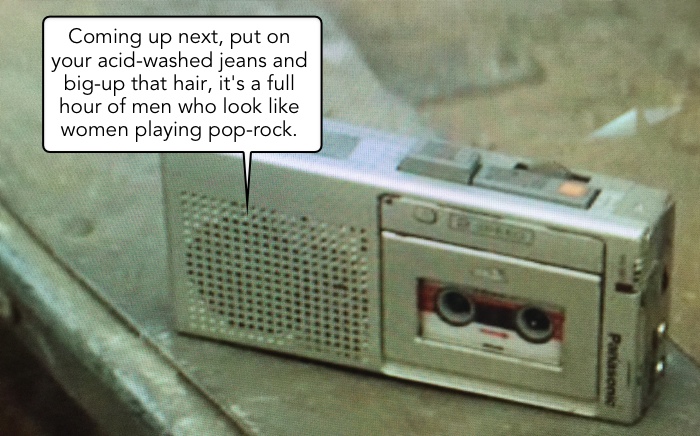 So there you have it. Sheena: Queen of the Jungle. It was a lot of fun seeing this classic again, not having watched it since I was sneaking into my parent’s living room in the wee small hours of the night as a teenager trying to catch a glimpse of any kind of female anatomy HBO was showing. Thank you, Tanya Roberts, for making many nights that much more wild.